On Saturday 26 June 1943, a member of the 103 Sqdn, Flight Lieutenant D Towers, took off from Elsham Wolds in the United Kingdom. His mission is mentioned elsewhere on Back to Normandy. You can find the other details of this mission by searching here. Training and cargo flights are not seperately mentioned as a mission. The plane left at 23:19. 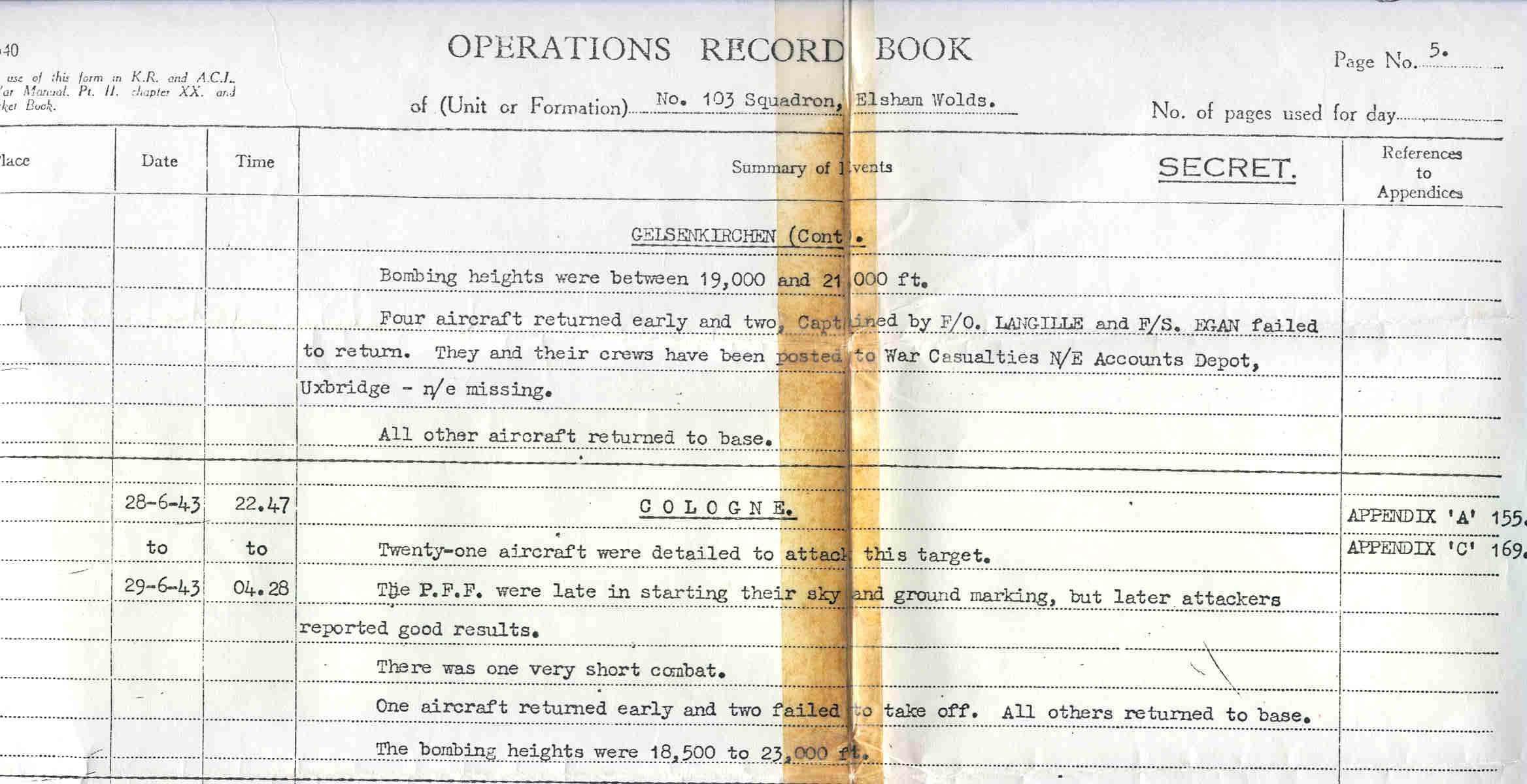 Campaign report of the USAAF:

(Eighth Air Force): Air Marshall Trafford L Leigh-Mallory is given responsibility for drafting air plans for the invasion of the Continent. His deputy is Brigadier General Haywood S Hansell, Jr. Eighth Air Force Mission Number 68: 165 B-17's are dispatched against the Vilacoublay, France air depot; 12 hit the target while 6 hit the secondary target, Poissy Airfield, and 39 bomb Tricqueville Airfield; they claim 17-5-10 Luftwaffe aircraft; we lose 5 B-17's and 14 others are damaged; casualties are 1 KIA, 3 WIA and 51 MIA. 5 YB-40 escort bombers take off to accompany heavy bombers but none are able to complete the attack.

Campaign report of the RAF:

473 aircraft ordered to Gelsenkirchen - 214 Lancasters, 134 Halifaxes, 73 Stirlings, 40 Wellingtons, 12 Mosquitos. This was the first raid to the city since 1941, when it had been one of Bomber Command's regular 'oil targets', although, being in the middle of the Ruhr, this town had often been hit when other targets were attacked. 30 aircraft - 13 Lancasters, 7 Halifaxes, 6 Stirlings, 4 Wellingtons - were lost, 6.3 per cent of the force.

The raid was not a success. The target was obscured by cloud and the Oboe Mosquitos, for once, failed to produce regular and accurate marking since 5 of the 12 Oboe aircraft found that their equipment was unserviceable.

33 aircraft were sent minelaying in the Frisians and off French ports. 1 Lancaster lost.

With thanks to the RAF and USAAF.net!

There are several possibilities to investigate the flight records on Back to Normandy. All the flights are plotted on maps, sorted "day by day", "by squadron", "by type aircraft", "by year or month", "by location" and much more! Don't miss this!!!

If you have any information that you want to share, please add your comment at the bottom of this record. Or send your information to . This information will be added to the record.

Russ Gittins posted a comment in Wednesday 10 January 1945
Why is the march THE 10th BN HIGHLAND LIGHT INFANTRY CROSSING THE RHINE referred to by many pipers a...
Thursday, 30 January 2020 23:53