On Sunday, 22 June 1941, (a part of) the aircraft of the 83 squadron (RAF), took off for a mission to Bremen in Germany from a station (airfield) in or near Scampton.
One of the crew members was Sergeant W G Price. He departed for his mission at 22:55.
He flew with a Hampden (type I, with serial AD969 and code DL-X). His mission and of the other crew members was planned for Monday, 23 June 1941.

The burial of RAF airmen at Bevern Cemetery, Germany in 1941- accompanied by POWs from Stalag XB Sandbostel and a Luftwaffe Guard of Honor led by Leutnant Ernst Bauer.

The following narrative is an account of the events and personnel depicted in the attached photographs.

On the night of 22 June, 1941, Hampden bombers from 83 Squadron took off from their airfield at Scampton, Lincolnshire. They were to form part of a raiding force of 45 Wellington and 25 Hampden bombers targeting German infrastructure at Bremen. Hampden AD969, code DL-X, was flown by Pilot Officer Richard John Heavens and Sergeant Walter George Price, and also include Flight Sergeant Neil Erskine Byres and Flight Sergeant Eric William Sponder. The aircraft was coned by searchlights while flying low and was shot down near the village of Bevern in the district of Bremervörde, Germany. Official documentation of the flight in the National Archives lists the crash as having occurred on 23 June. All four airmen were killed.

On the day of the burial, POWs from the nearby Stalag XB Sandbostel were brought in to take part in the ceremony. The highest-ranking officer of the internment camp was Royal Navy Captain Graham Francis Winstanley Wilson (saluting, holding wreath). He was captured after his armed boarding vessel, HMS Vandyck, was sunk by dive bombers off the coast of Andenes, Norway on the last day of the allied campaign in Norway- 10 June, 1940. In the photograph of him saluting the fallen airmen, he is accompanied by Major White of the Green Howards. He was captured while serving with his unit in France, 1940 and became the camp padre (chaplain). The German priest on the left of the image is a civilian and most likely from the congregation in nearby Bremervörde.

The airmen were accorded full military honors. Leutnant Ernst Richard Bauer led a Luftwaffe guard of honor at the burial. He was serving as a Gruppenleiter at the Munitions Depot in neighboring Hesedorf.

The burial itself took place in the village cemetery of Bevern despite there being two camp cemeteries further south (Lagerfriedhof Parnewinkel and Sandbostel). Given the crash date, the funeral must have taken place near the end of June or early July. After the war, the airmen were reburied at Becklingen on 3 October, 1946. Their graves are marked in Plot 13, Row F, Graves 1-4.

The images are included below in what I have determined to be chronological order. See bottom.

Photo 1: Only image that had a note on the back: “On the march to the burial of the ‘Tommies’”

WALTER GEORGE PRICE . SERGEANT PILOT 902862 20YRS . 83 SQN. WALTER GEORGE PRICE WAS BORN IN SEPTEMBER 1920 IN EDMONTON OXFORDSHIRE AND ATTENTED A CITY OF LONDON SCHOOL AND ON LEAVING BECAME AN AIRCRAFT DRAUGHTSMAN. SOMETIME AT THE BEGINNING OF 1940 HE JOINED 83 RESERVE SQUADRON STATIONED AT R.A.F.SCAMPTON. W.G.PRICE ACCORDING TO MY MOTHER IN THE VERY EARLY DAYS FLEW UNDER THE TUITION OF GUY PENROSE GIBSON. HE TOOK PART IN A NUMBER OF RAIDS OVER GERMANY AND ON THE NIGHT OF 22/23 JUNE,1941 AT 2255 SET OFF FOR BREMEN ON SUCH A RAID. HE WAS ACCOMPANIED BY PILOT OFFICER 83977 RICHARD JOHN HEAVENS. AGED 23 YRS. FLIGHT SGT. W.OP AIR GUN. 751927 ERIC WILLIAM SPONER. FLIGHT SGT. W.OP/AIR GUN. 640781 NEIL ERSKINE BYRES. THAT EVENING 45 WELLINGTONS AND 25 HAMPDENS TOOK OFF ON THE RAID. 1 HAMPDEN AND 1 WELLINGTON WERE LOST. W.G.PRICE AIRCRAFT AD969 CODE DL-X CRASHED OUTSIDE BEVERN IN THE DISTRICT OF BREMERVORDE.GERMANY. MY GRANDMOTHER RECEIVED LETTER FROM AIR MINISTRY DATED 5TH JUNE, 1942 CONTAING TWO PHOTOGRAPHS OF W.G.PRICE AND CREW BEING BURIED WITH FULL MILITARY HONOURS. A FURTHER LETTER WAS RECEIVED 30TH JANUARY,1951 SHOWING THAT HIS BODY AND THAT OF HIS CREW HAD BEEN MOVED TO BECKLINGEN WAR CEMETRY WHERE THEY ALL WERE FINALLY LAID TO REST IN ROW 13 F.1 F.2 F.3 F.4 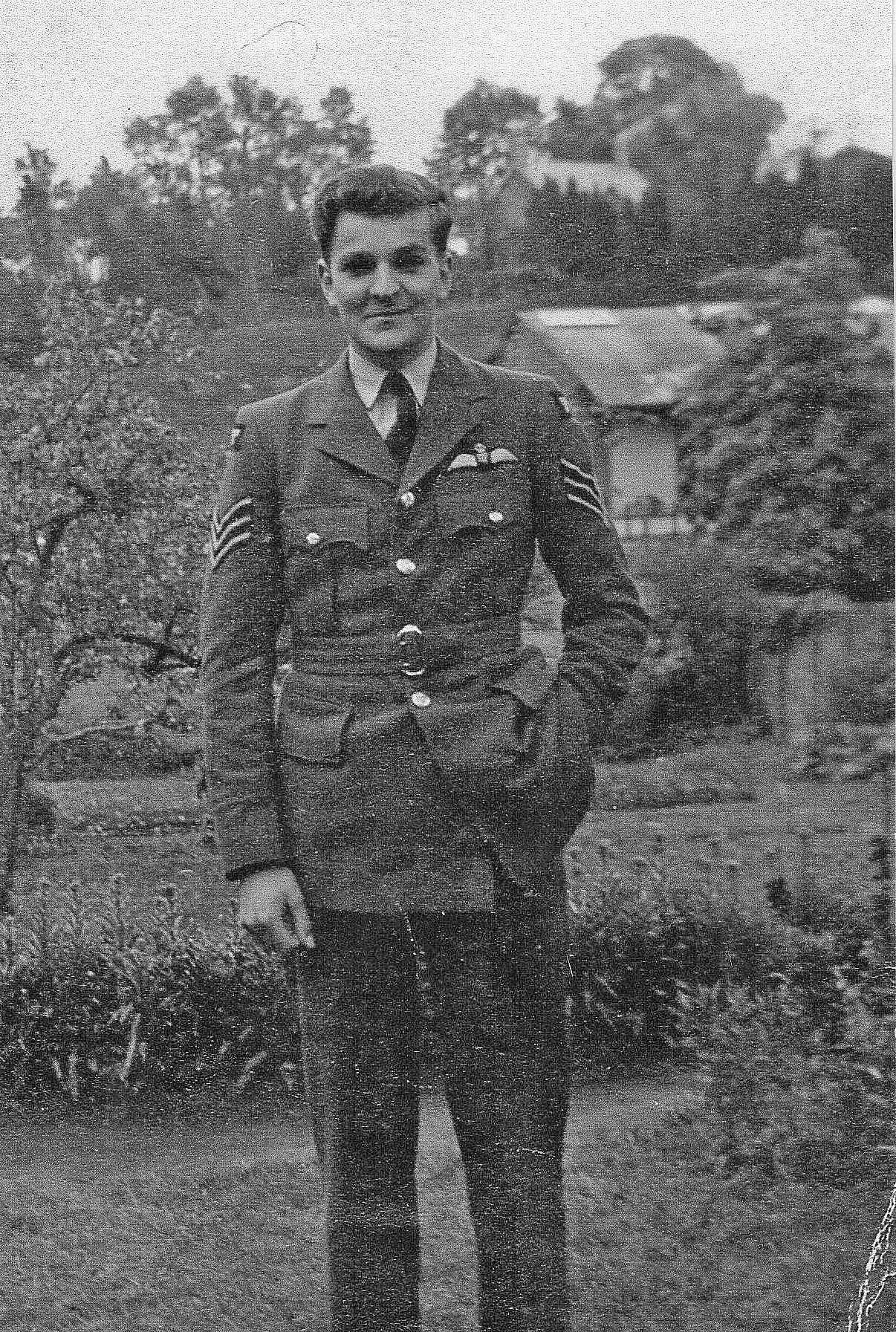 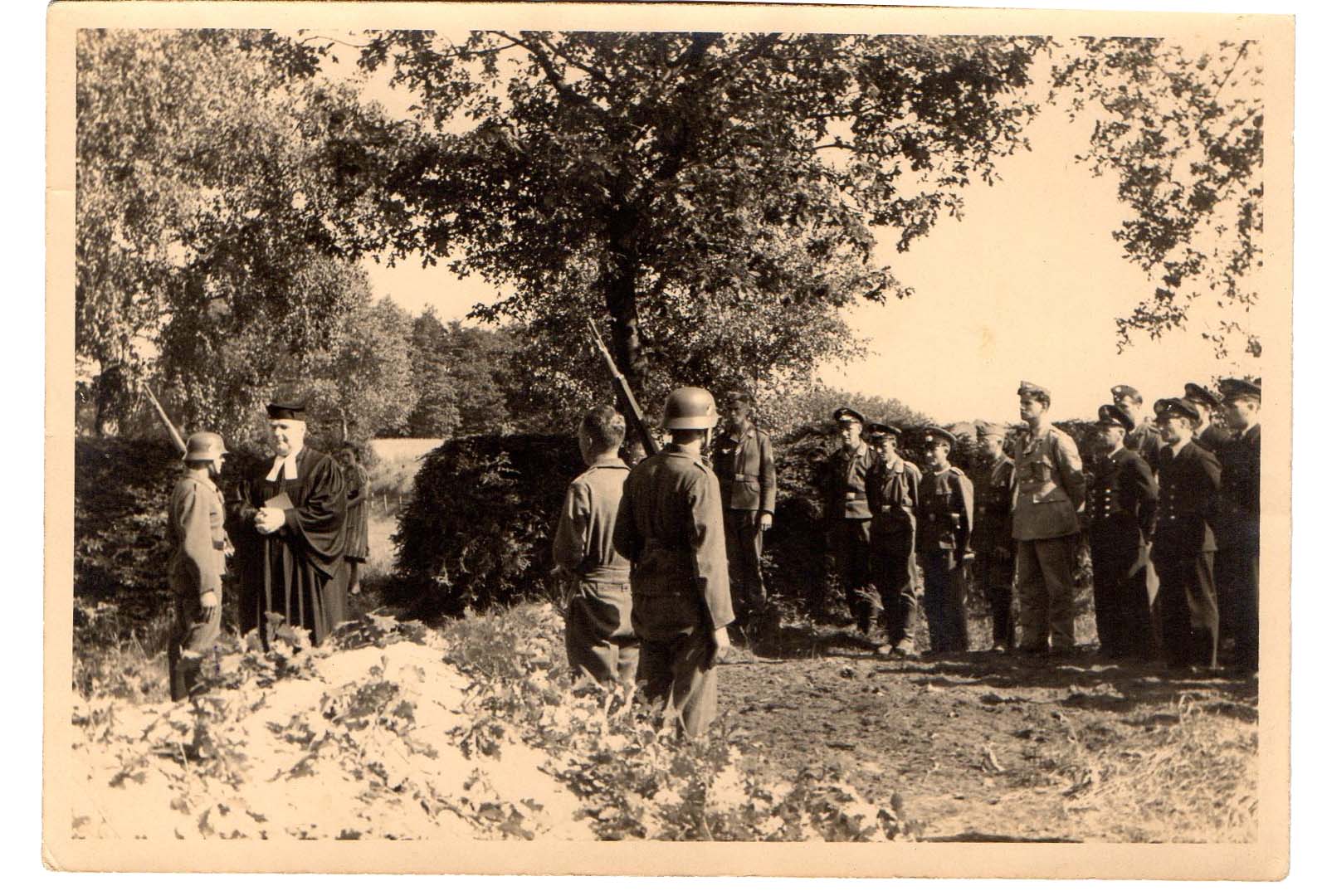 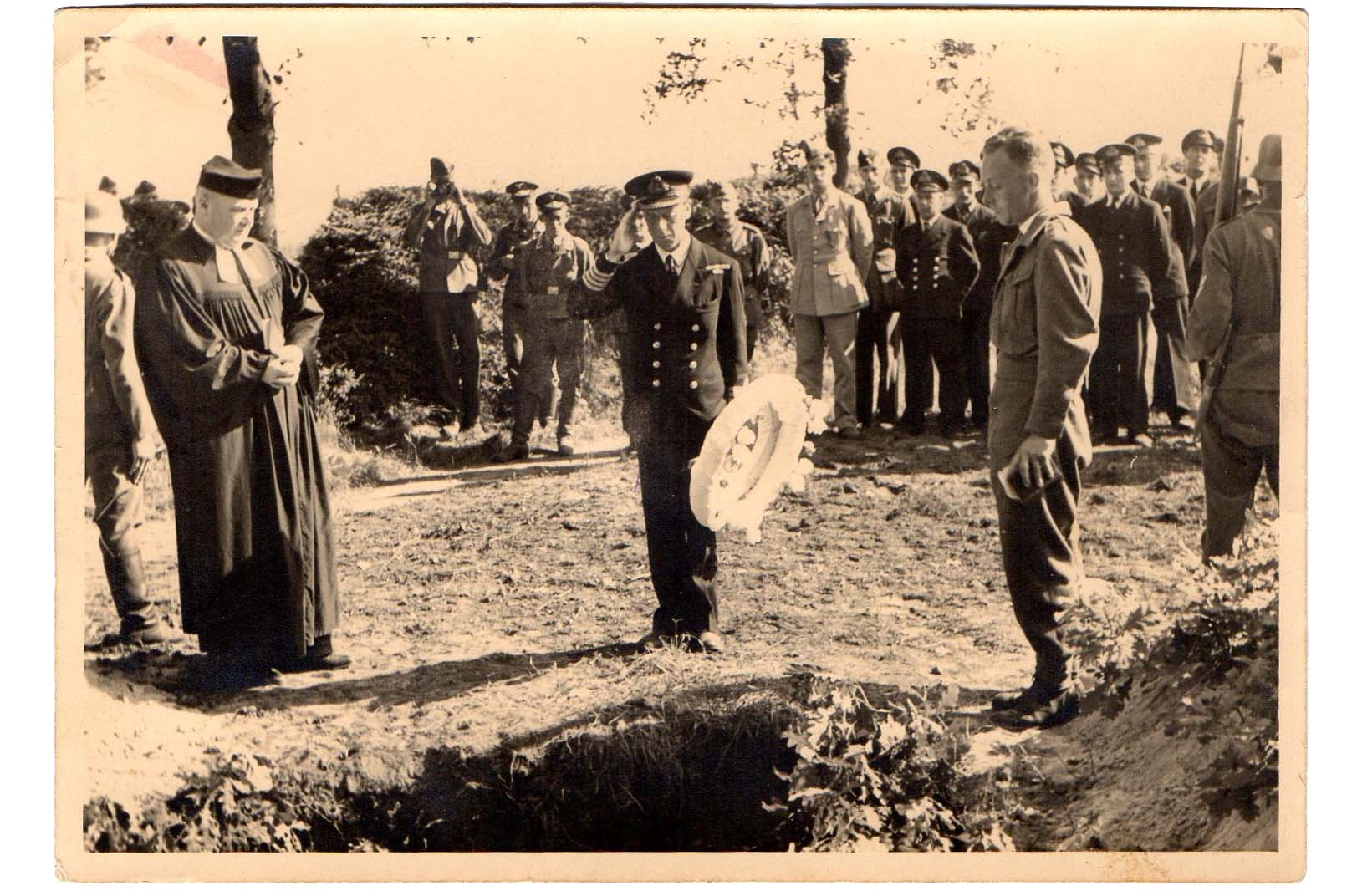 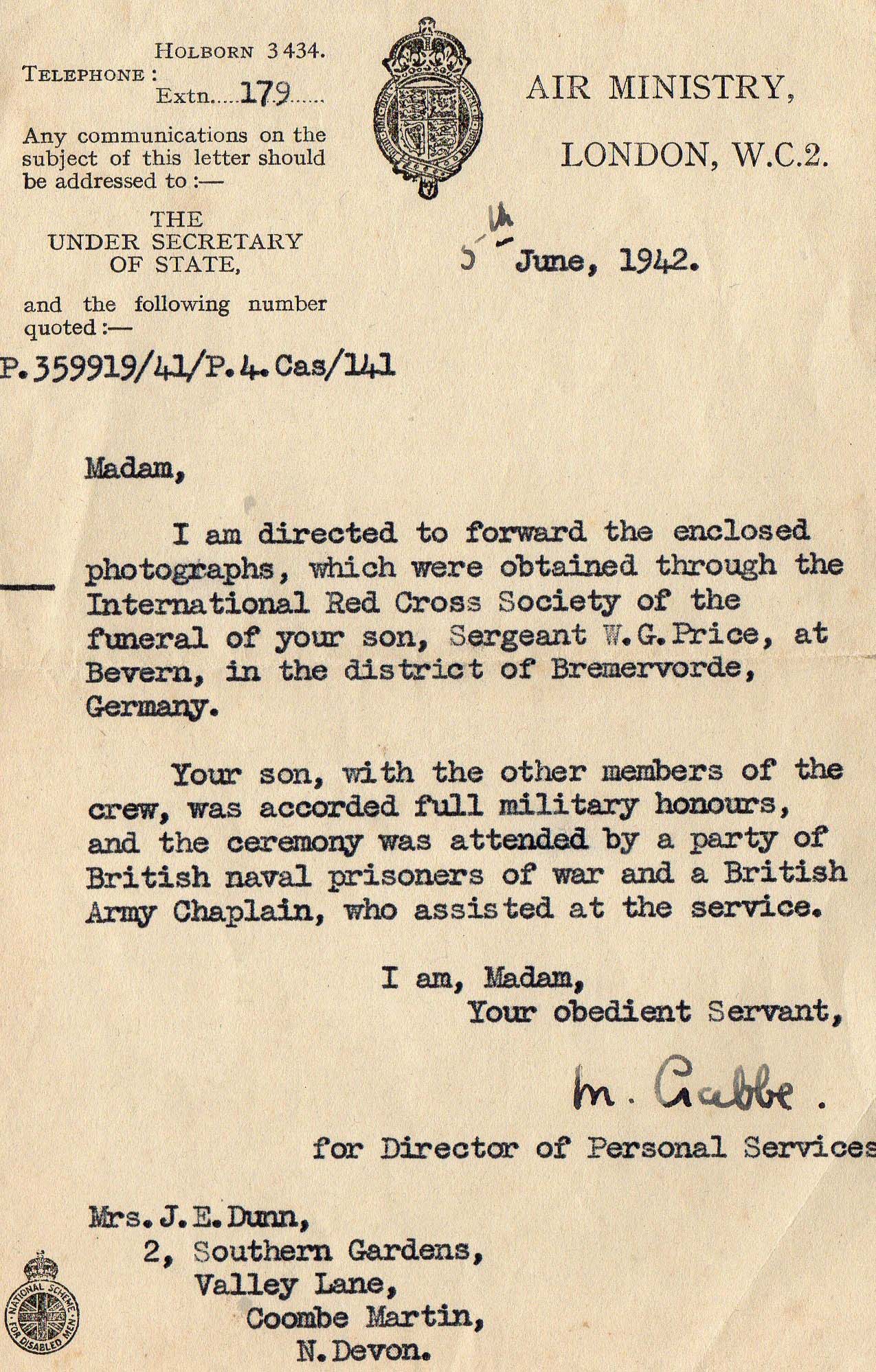 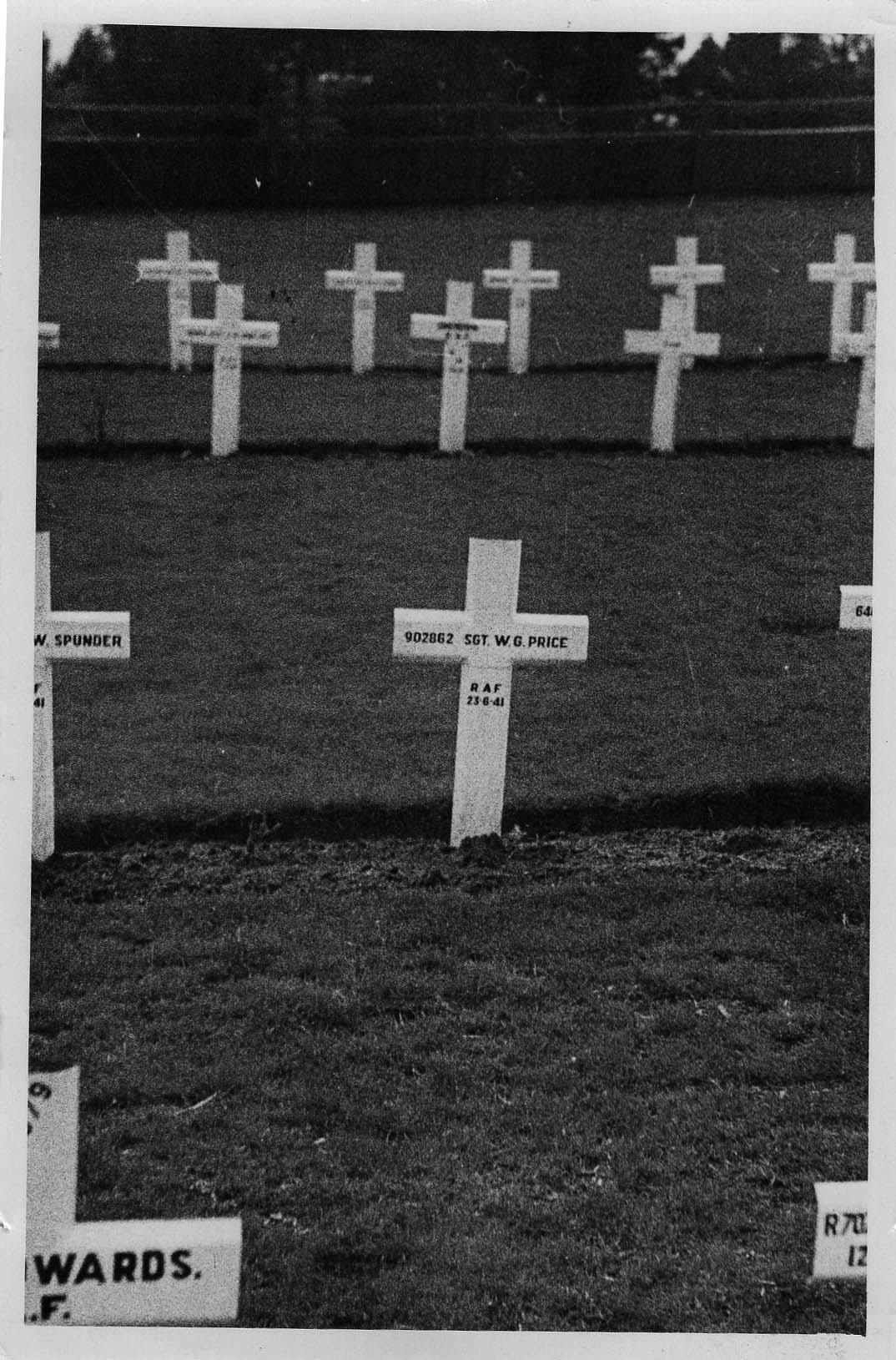 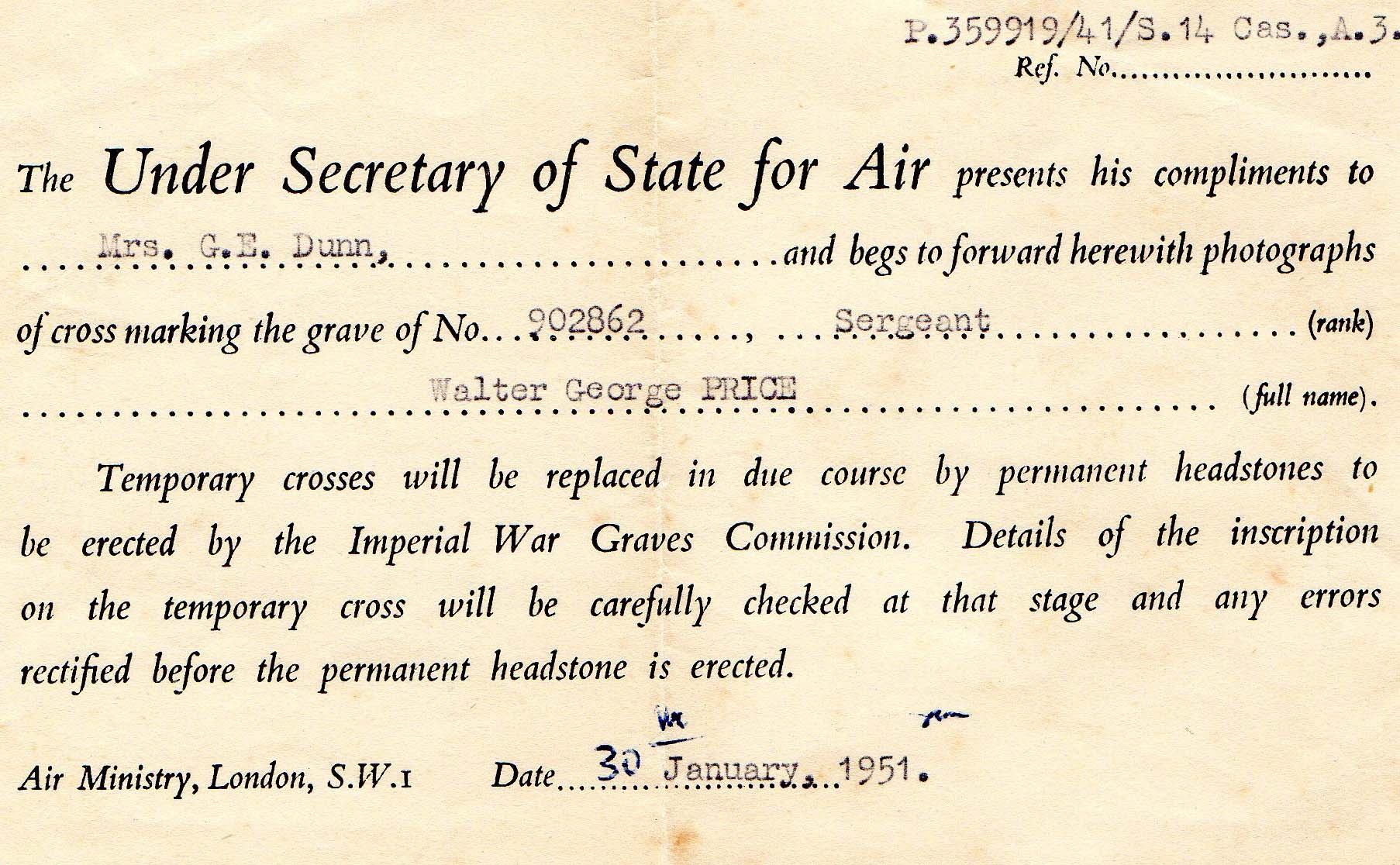 There are several possibilities in investigating the flight records on Back to Normandy. All the flights are plotted on maps, sorted " day by day", "by squadron", "by type aircraft", "by year or month", "by location" and much more! Don't miss this!!!

If you have any information that you want to share, please add your comment at the bottom of this record. Or send your information to

Date
1941-06-23
Status coordinate
The location is in a (the vicinity of a) city or town
Address
-, Bremen, Germany
Source of the information (link)
www.aircrewremembered.com(0 visits)
E-mail publisher
Hits
3,325
RecommendMap
User

John Cranmer posted a comment in Avro Lancaster II (DS778 EQ-U) on a mission to Kassel on 1943-10-23
Enhancing the image on this page https://www.backtonormandy.org/the-history/air-force-operations/air...
Wednesday, 17 February 2021 18:08