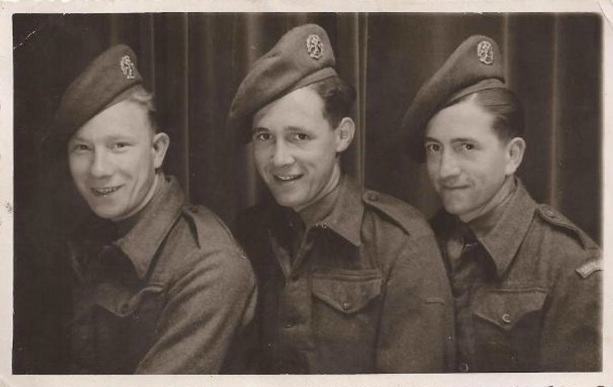 Malcolm Petfield "Lofty" as he was best remembered joined the ATC 1942 at 16 yr old , he trained and flew the Sopwith Camel(Bi plane). In his time with the ATC he won the Heavyweight Boxing Championships .He left the ATC due to eye problems and joined the Navy and trained at HMS Arthur (land based training "ship").

When the call came for troops for D Day he went to the local recruiting office which was set up in a village hall in Ripon , North Yorkshire, where he joined the South Lancashire Regiment.

Transferring from one section of the British armed forces to another during the war was not a problem .The MOD  were looking for men to join the assault divisions for D Day ,so they were automatically transferred with ease.

A Yorkshire man in the SLANR , I asked him how he became to be in a Lancashire Rgt , he told me  “when the recruiting Sgt asked which unit , he replied “I don’t know “ the recruiting Sgt showed a large picture frame that housed all the Regiments in the British Army and said “Pick a badge” he picked the SLANR because he said “ I liked the badge" !!.

He did 8 weeks basic training in Scotland and then onto D Day .After embarkation in Southampton they got under way and Lt Col Burbury  the Commanding Officer  gave the men a pep talk .His wife had made a battle pennant for the Btn , on landing he told the lads to rally to the flag, unfortunately not knowing what to expect on hitting the beach Lt Col Burbury  was fatally wounded.

My father landed at 7.25am on the 6th June . His words : "We landed and I was that frightened I just kept running forward where too didn't matter I just followed the lads in front " .As it was he and some others went to the right and ended up getting split up from the rest of the Btn .The rest of the Btn made it to Hermanville by 9am. My father and the others that had got lost ended up “street fighting” in the defended village of Luc Sur Mur and made it back to the Btn mid afternoon .
On the 7th June they were sent to secure Pegasus bridge from the 6th Airborne . Their time was taken up around the villages of Plumetot , Mathiau , Cresserons , Giselle woods skirmishing constantly with the Germans .They ended to the east of Caen at 2 chateau's named Chateau de la Londe and Le la Londel , they took the first without much of a problem (Le la Londel).
The other unfortunately caused them to have massive casualties. The second Chateau was surrounded by woodland and the area surrounding this was open corn fields .
They were ordered to do a silent night attack (No artillery or heavy support). My father said they got about half way across the open fields when all Hell broke loose; they were pinned down for what seemed an eternity. C Coy had made their way down the Chateau driveway only to be halted by heavy machinegun and mortar fire , they hastily dug slit trenches and laid low due to the constant strafing by heavy machinegun . A and B Coy were also pinned down and couldn’t withdraw until the the heavy machinegun fire had subsided. While the Germans kept the lads pinned down tanks came out of the woodland and made for the slit trench’s of C Coy constantly machine gunning the area , unfortunately the tanks of the 21st Panzer drove over the trenches and slewed round and around on the lads in them . My father said you could hear the poor “buggers” shouting and we couldn’t do a thing , all we had were rifles ,grenades, Bren gun and a 3” mortar , and you can’t fight tanks with them .They managed to withdraw back to the first Chateau and were sent back to  Hermanville  to regroup . They attacked the Chateau the following day again not gaining any ground. He said there hearts lifted when a Churchill Tank came into view , before the Churchill could engage the enemy my father told me “ it was taken straight out and had it’s turret blown completely off by a Panzer “. They were again withdrawn to regroup and with the 2nd East Yorkshire Rgt returned back to the Chateau only again to suffer more heavy casualties .Again withdrawal was on the cards ,the East Yorkshires along with the Suffolks and the remnants of the 1st Btn South Lancashires went back in . Due to the persistent attacks by the SLANR ,East Yorks and Suffolks  the Chateaus defences  had weakened and finally fell after 4 day’s of fighting . This area was known as the Bloodiest Square Mile In Normandy.

When they inspected the area they found it had been  heavily defended by MG42 teams which had mounted one gun above the other , the top one holding tracer and the bottom holding standard bullets, my father told me when the lads saw the tracers above they thought it safe to move , but unfortunately not knowing ,they were cut to pieces by the bottom MG42 .Panzers were dug in around the Chateau at Turret level ,and 20’ concrete walled tank traps to the rear of the chateau (which I’ve seen on my visits to Normandy ), the 21st Panzer had put up a bloody fight but in the end were beaten down by the constant offensives by the SLANR , E Yorks and Suffolks.

The Chateau was actually the property of the French General ..... General Le Clerc , to this day it is still owned by the family and run by his 2 grandsons. After a period of R&R they regrouped and were sent into the east of Caen.

After the fall of Caen he and the remnants of the Btn returned to England for 48hrs R&R . My father’s words .... “We got off the troopship and were told to leave our kit on the dock , and directed to the Salvation Army soup kitchen and given hot food and drinks , then  sent into a big dockside warehouse where they had set up a QM Stores , we were issued new kit and told to put our old kit on the huge pile outside that was already there, the old kit was burnt on a large  bonfire ,we got our heads down “. 48 hrs later the Btn was made upto strength and sent  into Holland ,Venray and Overloon . 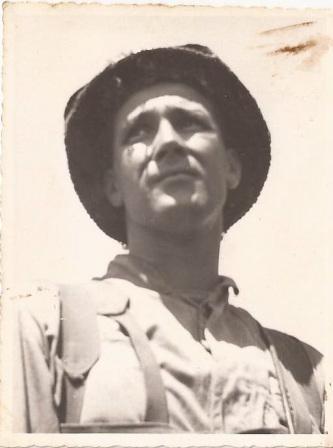 Then onto Germany where he was part of the occupation force . During his time in Berlin he guarded Rudolph Hess and Albert Speer , he was sent on a troop ship to Tripoli to bring back war criminals for trial at Nuremberg.

He was then sent into Italy on the Italian and Yugoslavian Border , there mission there was keeping Tito’s army out of Muggia, Trieste . Two zones were set up A & B , which one was the British and the other American and the job in hand was to defend these zones from Communist insurgents , from there he went into Palastine and the Suez Canal Zone.

The 1st Btn amalgamated with the 2nd Btn in Trieste as part as BETFOR , during his time in Lazaretto he met a young lady in Muggia called Elvira Massari whom he married and was happily married too for 54yrs up until he passed away. My father stayed on as a full time serving soldier after the war for 26yrs.

My father stayed on as a Regular up until the 60's , during his time he was the undefeated Heavy Weight Boxing Champion of the British armed forces , these trophies are kept along with his medals, he served in major conflicts post WWII and was at one point attached to the Parachute Regt.

He never spoke in detail about his time during WWII , I always remember him saying to me " If any man says he wasn't frightened , he's a liar. "There are not words that would even start to describe what it was really like, apart from we were frightened to death"

When I took him back to his first Normandy Anniversary( it was 45yrs later) ,I asked him where abouts he actually was in the battle area ,he could never point to a  specific area , but would say "we were somewhere around here,   you didn't take much notice of where you were, you were concentrating more on staying alive“.

When I took him down to Sword Beach at 7.25 on the 6th June (the time he landed), he walked away from me, and for the first time in my life I saw my father actually shed tears !!,this was a shock for me, because he was not normally the emotional type , or he kept it very well hidden .