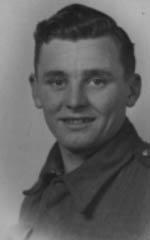 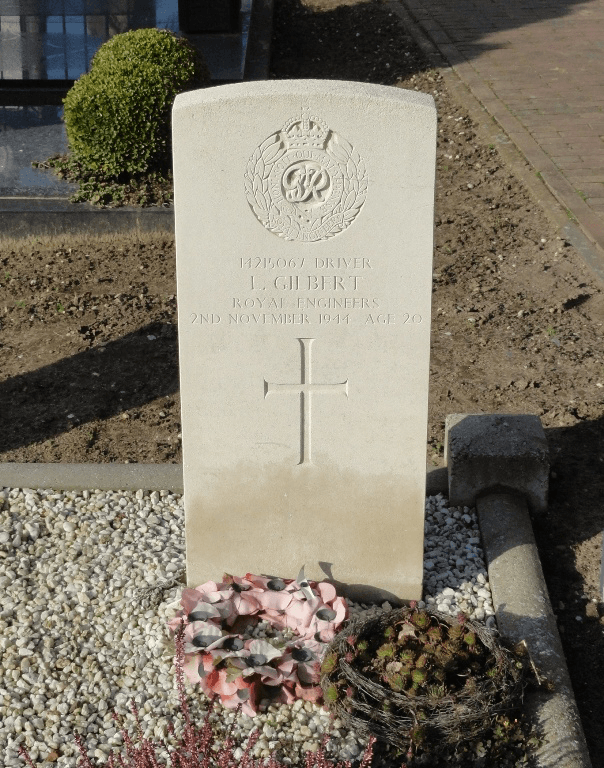 Leslie Gilbert was the fourth of eight children born to Lily and Trewern Gilbert in Bognor Regis, Sussex in early 1924.

He enlisted in the Army on 2nd July 1942 and during his first 4 months of Basic Training, was a member of B Company, 1st Motor Transport Depot, Royal Engineers and was posted to 521 Corps Filed Survey on 28the October 1942.

521 Corps Royal Engineers were formed in the Ampthill area outside Bedford and were part of the British Second Army, under Colonel A. W. Heap. An advance party of consisting of 3 Sapper and the Company Sergeant Major Simpson together with 10 tons of maps arrived on the Normandy coast on the 8th June 1944 and were soon followed by the major portion of 3rd (Army) Field Survey Depot RE with a further 60 tons of maps and a small quantity of transport. Later in June 1944 the 3rd Field Depot was joined by the 4th and 5th Depots and formed a map supply depot in Caen after its capture.

In total the full survey organisation comprised the following RE Units:

521st Field Survey Company arrived on the Normandy beaches between the 8thand 12th June 1944 and formed up as a working Company in the village of Thaon, which is about 5km north-west of Caen.

Over the next few months 521st Field Survey Company moved from Thaon, to Amblie on 22nd June, then to Martragny on 17th July, following the breakout from the bridgehead, 521st Field Survey Company were to be found at Le Sap 26th August before and reaching a small village outside of Amiens on 4th September. By the 1st October they could be found outside of Eindhoven and were based there for the next 6 months.

It is my understanding that the front line between Allied and Axis forces around the Ottersum area was pretty fluid between October and December 1944.

On the 2nd November 1944 Driver Gilbert asked his best friend Driver Harry Fowler, the normal driver of the light truck, if he could drive it that day, and he together with a Corporal Clark and an Officer appear to have crossed the front line at some point and they were ambushed by a party of German soldiers and whilst Cpl Clark was capturer Driver Gilbert was killed. The Officer made it back to Company Head Quarters and reported the incident.

Fred I thank you for commemorating my Uncle Leslie Gilbert on this page as well as all of the other brave men and women who paid the ultimate sacrifice.<br />We will Remember Them.

Graham Moore
There are no comments posted here yet