These articles are made from British documents, written in november 1945. With the knowledge of today not complete, but still interesting.

Line of Communication (L of C)

During the period in the bridgehead and until the armies had crossed the SEINE, the organisation of the L of C remained largely unchanged from the original layout. There were, however, one or two minor alterations involving local administrative changes of L of C formations.

On 31 July HQ L of C assumed responsibility for the control of CAEN through 7 Base Sub Area, which relieved 101 Beach Sub Area there.

On 3 August, 10 Garrison at PORT EN BESSIN was relieved by 101 Beach Sub Area and reverted to under command Second Army.

By the end of August, 102 Beach Sub Area became 6 L of C Sub Area and on 28 August 12 L of C Area took over direct responsibility for CAEN from 7 Base Sub Area.

Meanwhile preparations were being made for establishing the advance base in the area NORTH of the SEINE and 7 and 8 Base Sub Areas were standing by ready to implement at the earliest opportunity the original plan whereby they would administer the SEINE ports under HQ L of C.

It became apparent, however, after the crossing of the SEINE and the rapid advance into BELGIUM, that the L of C would be stretched to its utmost and that the advance base would be established in the area of ANTWERP and BRUSSELS and not in the area of LE HAVRE.

As a result many changes were effected on 2 September 12 L of C Area took over from 11 L of C Area administrative control of all L of C formations in the bridgehead and subsequently assumed responsibility of all territory SOUTH of the SEINE within the boundaries of 21 Army Group; on 3 September 11 L of C Area moved forward to AMIENS and took over administrative control of the BRITISH sector of FRANCE NORTH of the SEINE to the FRANCO-BELGIAN frontier.

At the beginning of this phase HQ 7 and 8 Base Sub Areas, which were administering ANTWERP and OSTEND respectively were under command of First Canadian Army, while HQ 4 L of C Sub Area in BRUSSELS was under command of Second Army.

Each of these HQ was also made responsible for finding suitable accommodation for HQ installations in its area of the new advance base. At the beginning of October HQ 4 L of C Sub Area handed BRUSSELS over to a specially formed garrison HQ entitled HQ Brussels Garrison and assumed administrative responsibility for the 21 Army Group roadhead in the area of DIEST. All the above HQ came under command of HQ L of C after the move of that formation to MALINES at the end of September.

When Rear HQ 21 Army Group moved to BRUSSELS the L of C was already stretched from BAYEUX in the RMA to the BELGIAN/DUTCH frontier and its ration strength at the end of October had risen to 450,000 including RAF and PW personnel. Even with the addition of HQ 15 L of C Sub Area the number of suitable administrative headquarters was clearly insufficient for proper control and so HQ 16 L of C Sub Area was formed and HQ 11 Garrison was converted into HQ 9 L of C Sub Area. On 28 September HQ 16 L of C Sub Area assumed responsibility under HQ 11 L of C Area for the department of the SOMME and a portion of the OISE department. In November it moved into BELGIUM to administer the port of GHENT, the responsibility for the territory previously administered by it devolving on 6 L of C Sub Area. In October HQ 36 Beach Brick, which had moved up from the RMA, took over administrative responsibility for the arrondissement of BOULOGNE.

On 8 December a large scale re-shuffle took place and HQ 11 L of C Area moved to MALINES to take over administrative responsibility for the advance base and those parts of BELGIUM Within the L of C zone. HQ L of C then moved back to ROUBAIX in FRANCE in order to be in a more central position for controlling the whole L of C. Simultaneously HQ 12 L of C Area moved from CABOURG in N ORMANDY to AMIENS to assume administrative control of all areas of FRANCE Within the BRITISH zone. The administrative layout of the L of C as at 31 December is shown at this map: One of the first steps taken by HQ 21 Army Group to provide more administrative formations and units for the support of the advance into GERMANY was the implementation of the decision mentioned in the last phase to shorten the L of C and to close down the RMA.

The first programme for this had allowed until 20 March for the transfer of stores from the RMA to the advance base.

Early in February this plan was cancelled and a decision was taken to close the RMA from 20 February.

After that date the RMA would be placed on a care and maintenance basis and no further stocks would be transferred to the advance base with the exception of ten train loads of vital ordnance stores.

The depots in the RMA and the stores remaining in them would be handed over to War Office control and shipments to and from CAEN would then be restricted to the maintenance requirements for the personnel remaining in the RMA, the export to the UK of certain repairable assemblies and unwanted stores, and the import of coal.

As from 15 February the BRITISH controlled area SOUTH of the River SEINE, then administered by 5 L of C Sub Area, and 101 Beach Sub Area would be condensed to a smaller area containing the actual depots and the ports of CAEN and OUISTREHAM.

On the same date the whole of the area administered by 6 L of C Sub Area SOUTH of the SOMME would be handed over to the US Communications Zone with the exception of the city of AMIENS.

Lastly, the area administered by 9 L of C Sub Area would also be transferred to the AMERICANS.

As units and formations were freed from their commitments.

In the RMA they would be moved to the advance base as soon as accommodation could be found for them.

On 15 February HQ 5 L of C Sub Area assumed overall control of the whole of the reduced area of the RMA and 101 Beach Sub Area went to under command Second Army for employment in the forth-coming operation PLUNDER.

HQ 9 L of C Sub Area was transferred to PARIS to assist HQ Communications Zone with the administrative arrangements in connection with operation GOLDFLAKE.

The administrative layout at this time is shown at this map 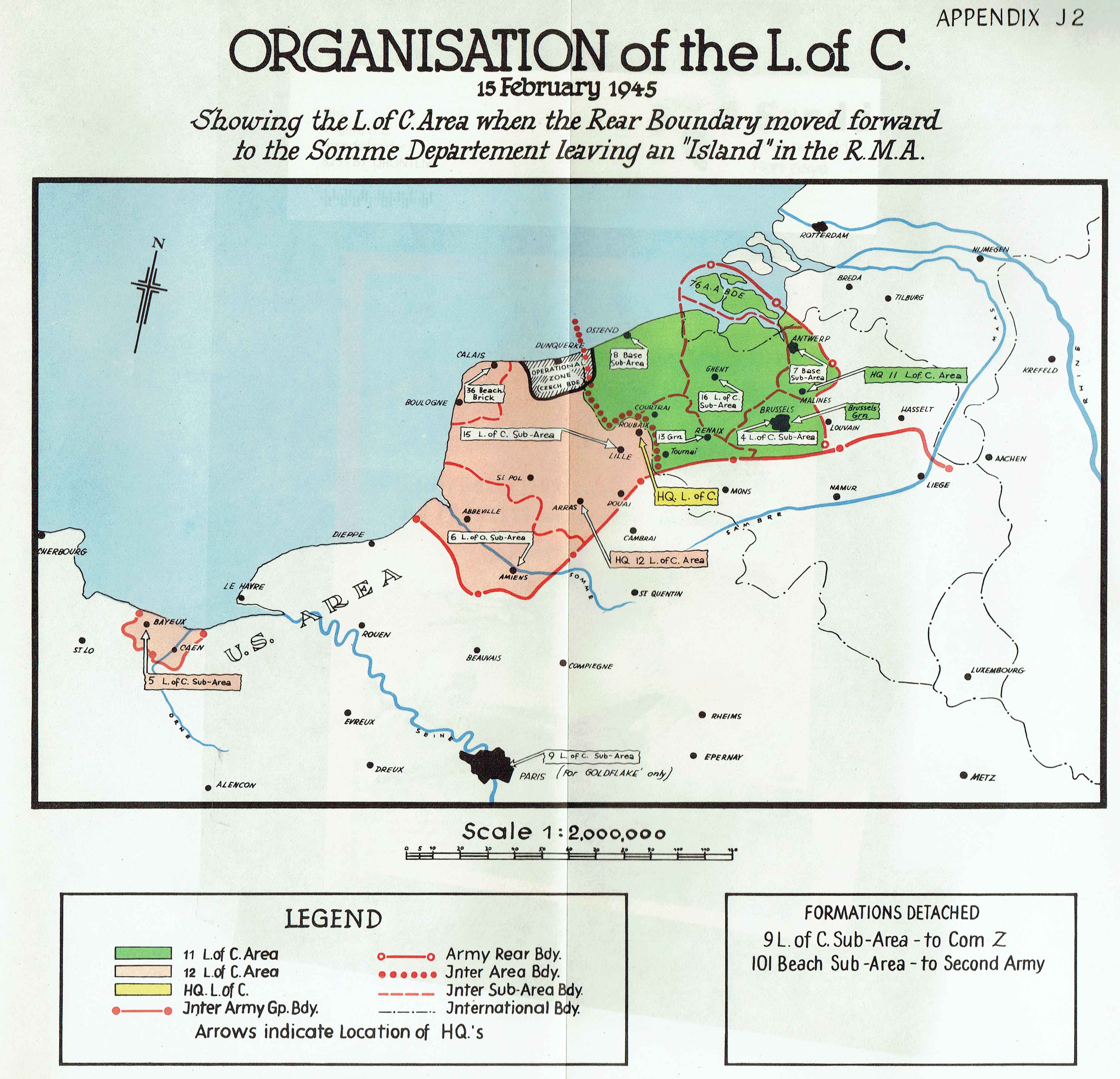 It was now decided to make HQ 11 L of C Area responsible for the administration of the whole advance base area and its ports and thus to free HQ 12 L of C Area for future L of C commitments particularly in HOLLAND.

It was estimated that seven new sub area HQ’s would shortly be required, of which three would be used to free existing HQ in BELGIUM for duties elsewhere, one would take over BELGIAN territory at present in the army area, two would be employed in GERMANY and one in NE HOLLAND.

In March, therefore, War Office agreed to provide a HQ Garrison (eventually called HQ 25 Garrison) to relieve HQ L of C Sub Area in the RMA, and approved the formation of HQ 17, 18, 19 and 20 L of C Sub Areas.

HQ 101 Beach Sub Area was then made available to the L of C by Second Army and upgraded to HQ 21 L of C Sub Area.

By the end of March the remainder of the department of the SOMME was handed over to Com Z, and HQ 6 L of C Sub Area moved to TILBURG early in April coming under command of HQ NETHERLANDS District in readiness to administer ROTTERDAM when it was captured. ’

It was planned that the L of C would extend as far as the WEST bank of the RHINE and 1 Corps subsequently renamed HQ 1 Corps District under command of Second Army was allotted HQ 15 L of C Sub Area (which had been relieved at LILLE on 6 April by HQ 17 L of C Sub Area) and later HQ 19L of C Sub Area to administer the area between the rivers MEUSE and RHINE.

HQ L of C would be responsible for the administration of the areas up to the MEUSE.

On 2 April HQ 25 Garrison replaced HQ 5 L of C Sub Area in the RMA and the latter took over the western part of NORTH BRABANT.

In the BRUSSELS district HQ 20 L of C Sub Area took over on 10 April from 4 L of C Sub Area which went to under command First Canadian Army and administered the area North-East of NIJMEGEN.

HQ 18 L of C Sub Area was formed by 25 April and was placed under command First Canadian Army. The administrative layout of the L of C at the cessation of hostilities is shown at this map: 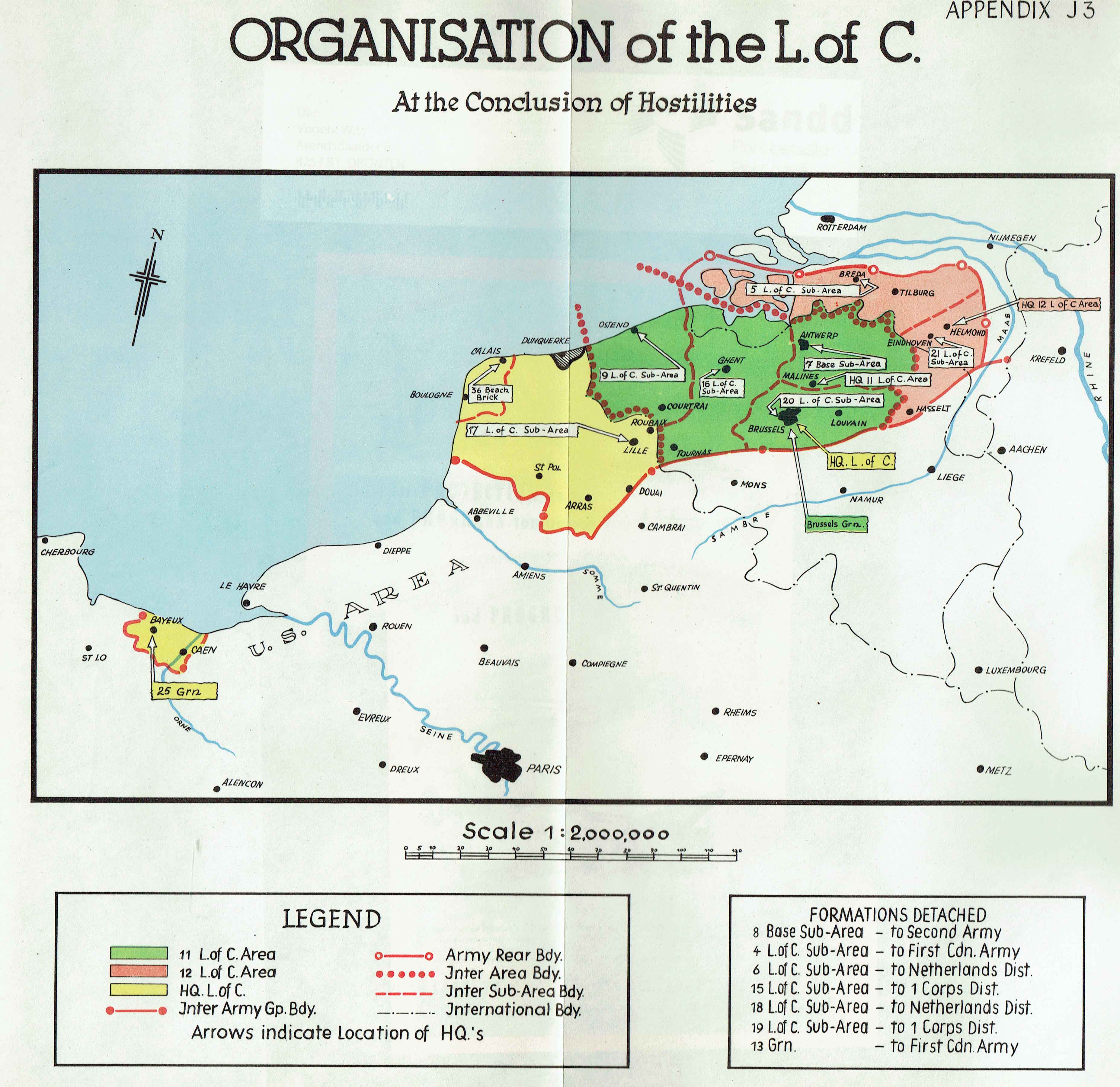