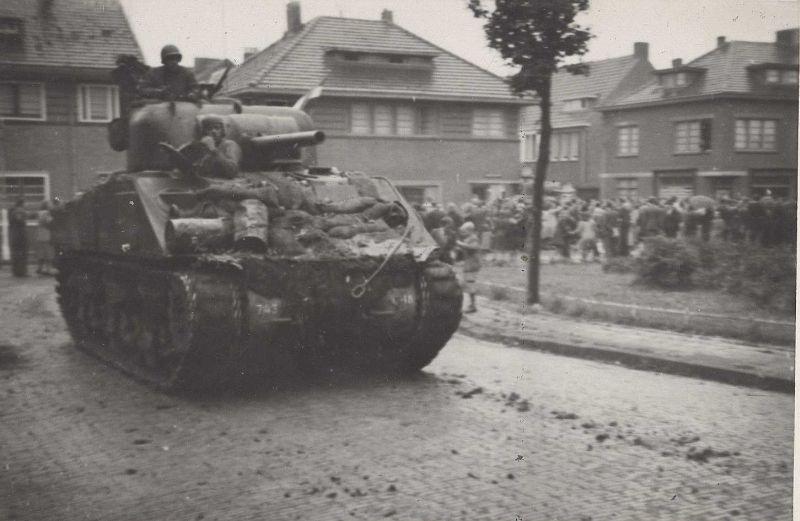 INTO THE DRAGON'S TEETH

a short story of the 743rd Tank Battalion in the vicinity of South -Limburg.

When the platoon column began to move out of the little Dutch village called Mheer, the lead tank was fired on by a enemy pantzerfaust gunner. The rocket missed its target. Infantrymen of the 30th Infantry Division took quick care of the German pantzerfaust gunner. The dough-boys then kept right on hoofing it to the next town. The tanks of the 743rd stopped. They were again out of gas. The reality of war was grimly present once more.

Along the Maas River, the Germans showed a frantic - and frantic - determination to throw up some semblance of a line from Maastricht to Charleville after vacating Charleroi, Mons, and Tournai. The Maas thus was the German Army's first defense line to confront the First American Army after the Seine crossing. There were remnants of four infantry and seven German panzer divisions dug in there.

By September 12, the First Army's sustained drive had been stopped. The war settled down to a foot-soldier's walk again. Ahead was some of the bitterest fighting of the war. The sprawling, ancient city of Maastricht threw away its Nazi swastikas and unfurled its red, white and bleu flag of the Netherlands on September 14, 1944.

Able Company worked with the 117th Infantry to clear Maastricht. At the same time, Charlie Company went eastward into Oud Valkenburg which was supposed to contain friendly troops. Instead the place was occupied by German infantry. When enemy artillery began to range in, the tanks set up a defense in nearby Valkenburg. The 743rd Tank Battalion was counting casualties again by enemy artillery fire.

As the 30th Infantry Division together with the 125th Cavalry Reconnaissance Squadron pushed along the Maastricht - Aachen road, the Germans threw in heavy concentrations of shellfire. This artillery was to be steady diet for months to come. Across the 20 mile stretch of Holland that comprises the Panhandle thrust down between Belgiun and Germany, the three key towns in the route of the 30th Infantry Division were Maastricht, Valkenburg, and Heerlen. Maastricht was cleared. Valkenburg was next.

Then on September 17th Charlie Company helped to liberate the neat-as-a-pin town of Heerlen. Other units were entering the town north, south, east and west, such as Ubachsberg, Kunrade, Welten, Terwinselen. On September 19th the 743rd Tank Battalion had some of its tanks (1 company) inside Germany. Earlier the mortar and assault gun platoons had fired on targets inside Germany.

On September 19th, Able Company crossed the Dutch-German border and advanced into Scherpenseel, supporting the 1st Battalion of the 117th Infantry Regiment. Plans were readied for an attack through the Siegfried Line beyond Scherpenseel, but bad weather settled down, grounding the air support, and the attack was put off 24 hours - and then indefinitely.

As the First Army marked time before the pill boxes and dragon's teeth, an all-out attack was being planned to crack open the line. From September 20th to October 2nd , the companies and all units readied themselves for the assault. The 30th Infantry Division had a sector 10 miles north of the German city of Aachen.

The swift and ugly ribbon of water called the Würm River ran through the sector before the Todt-built fortifications. And a few thousand yards front of these bristling defenses as enemy artillery probed about seeking to destroy troop concentrations, tanks and infantry again, as they did before the hedgerows, rehearsed special maneuvers. This time the problem was not to crush natural barries, but man-made structures: mushroom-thick, cunningly placed pill boxes, tank traps, barbed wire entanglements and field fortifications of every description.

As the days went by to October 2nd, officers and men studied their maps, briefed themselves on every detail of the terrain and known defenses ahead. They studied aerial photos and made plans for the approach and breaching of each identified obstacle. And trucks took man back to Heerlen for hot showers and the two U.S.O. stage shows. Then the push to crack the Siegfried Line began.

While the big pursuit from France to Belgium trying to head the retreating Germans off before they could scurry behind their Siegfried defenses was a vast operation on a canvas so broad that the individual soldier was almost lost to sight in the great mass movement, the individual was there. He was there hunched on the hard seat in the back of an overcrowded half-track, or cramped into the bucket chair inside a tank, or feeling each bounce in the road in the rough-riding peep.

The individual was there, every man with his own adventure and his own story to tell (or not to tell) in his own way. Behind him was the Normandy campaign, the Battle of Northern France, the drive through Belgium and Holland. Ahead was the Battle of Germany. The generals had it mapped out. But the individual would fight it. More to come.