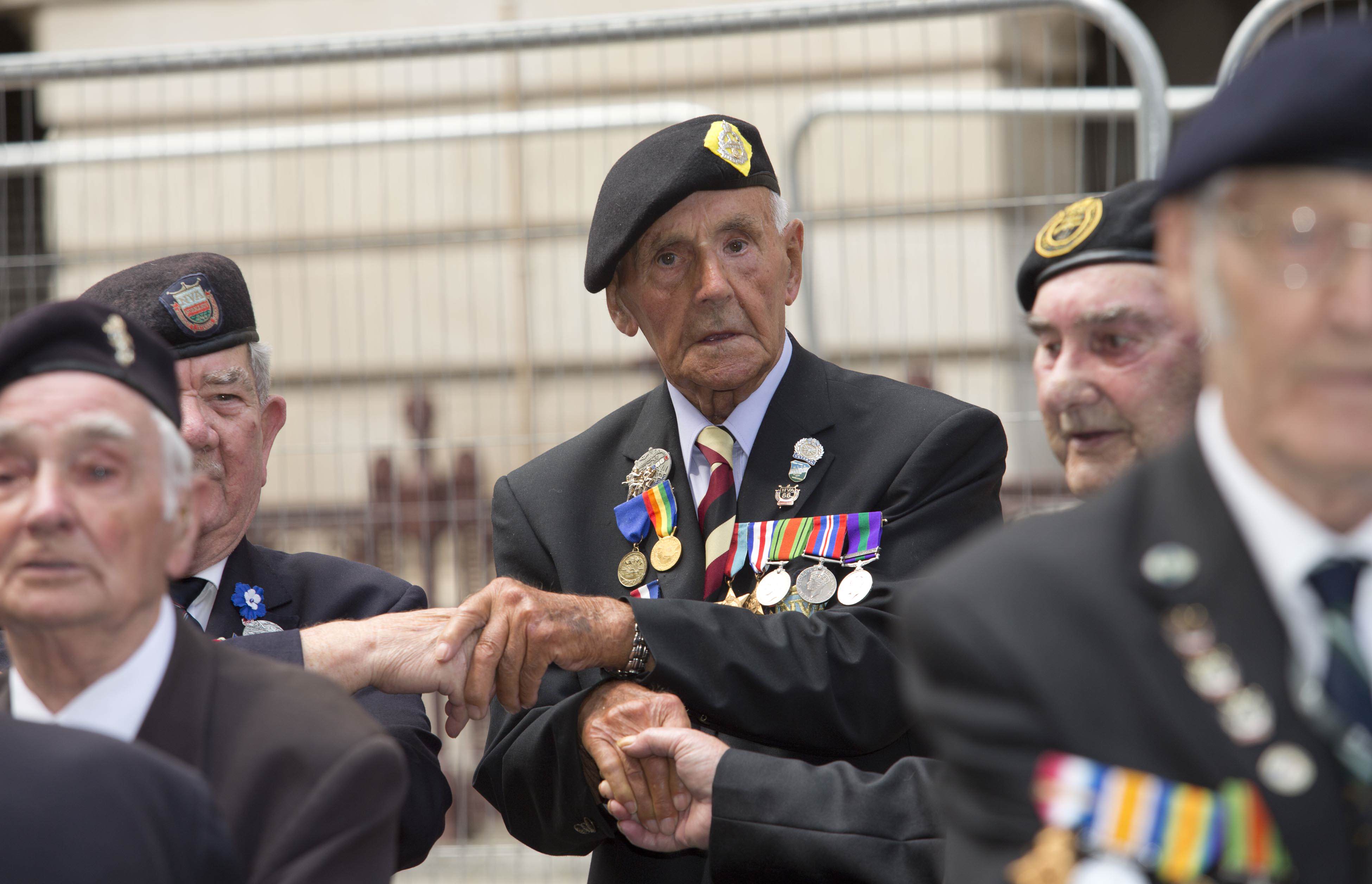 The Normandy Veterans Association (NVA) will disband on the 22nd of November 2014. Just after Remembrance Day. Remembrance Day will be the very last official public appearance of the NVA at Whitehall, London with thousands of other veterans. The NVA flag will find its final destination (laying up their colors) in a church near Westminster Abbey.

My task was - in the commission of the NVA - to make a docu-film of the last official commemorations in France and in London at Whitehall (not Remembrance Day, but an impressive March only for the Normandy Veterans of WW2 near the Cenotaph).

From this link (CLICK HERE) you can find some photos, taken from my documentary The Last Pilgrimage. This docu will be published and sold by the NVA. You can order the DVD by writing to this e-mail address: . In the subject line mention: DVD NVA. And the mail will be forwarded to the NVA. All revenues will be given to one or more charities chosen by the NVA. This docu will show the last official commemorations of the NVA in Jerusalem, Colleville-Montgomery (at the statue of Montgomery, owned by the NVA ), Ranville cemeteries, an impression of War Cemetery of Bayeux and an interview with George Batts, National Secretary of the NVA. Because of the importance of the words of George, I will also publish his interview on Back to Normandy.

The Netherlands and the commemorations in Arromanche-les-Bains

I am a fervent supporter of the commemorations of D-Day in Normandy for many years. This year I also could organize a commemoration about D-Day in my hometown Dronten with the visit of an American orchestra playing my composition "Back to Normandy" in the Meerpaal and a special moment at the monument for the fallen airmen in WW2. Reason for this all is obvious: on June 6th 1944 the liberation of Western Europe started with the landings on the Normandy beaches.

So far so good. Just as the last two years I was surprised about the way the Dutch people are commemorating D-day in France. First by marching with German troops in the heart of the British place for their commemorations, Arromanche-les-Bains. The Élysée Treaty of 1963 which settles a conciliation between Germany and France is used to explain why this march is necessary and essential. But in fact it has nothing to do with the goals of the British veterans in Normandy. They want to commemorate their comrades. You can read the whole story here: https://www.backtonormandy.org/stories/623-arrogance-in-arromanche.html

This year, again there was a remarkable action by the Dutch Government by sealing off Arromanche completely for the public, because of the visit of the Dutch Royal Family. And they didn't come alone! Hundreds of Dutch soldiers made sure that British visitors could not visit the meeting place of the British veterans in the morning of their most important day of the year, June 6th! In previous years the Dutch army, Princess Irene Brigade had their commemoration the day after, on June 7th.

Also ridiculous was the fact that the square had to be rebuilt for the Royal guest to make sure that they would have a dry place for them and the many guests they brought with them. As far as I know, this never happened in the tradition on the Place 6 Juin.

Historically spoken there is no reason at all to push the veterans aside for this commemoration: The Dutch army arrived only 2 months after D-Day and only partly in Arromanche on the 7th of August 1944.

To me, this Dutch commemoration has more to do with symbolic politics than commemorating the facts that have happened there. In such a case a much more modest contribution of the Royal Dutch Family would have been appropriate.

The Royal British Legion in Bayeux

Beside my criticism on the Dutch, the English can be very careless too! In the commission of the Normandy Veterans Association (NVA) I was making the film " The Last Pilgrimage". Doing this I have to deal also with the organizations behind the commemorations. In this case the commemoration in the War Cemetery in Bayeux.

The Royal British Legion (in charge here as organizer) made a number of very big mistakes. First mistake was the absence of the National Standard of the NVA during the live broadcast worldwide of the commemoration of the NVA in presence of the HM Queen of the United Kingdom. I heard afterward that this flag was refused because it was not present at the rehearsal! He was in Colleville-Montgomery for the NVA!  A stupid reason for a Standard bearer who has carried the Standard for many years. The band was not at the rehearsal either because they were also in Colleville. And they played!

Another amazing decision of the RBL was the fact that there were no chairs for the closest family of the veterans. They had to stand on a location from where they could not see anything of the commemorations for their loved ones. And this commemoration was the final parade for the Normandy Veterans and last chance they could witness it. The chairs had been allocated by the RBL to veterans from other conflicts e.g. Korean war and the Falklands war. Conflicts which were not remembered at this ceremony.

I remember the commemoration of last year too. Also organized by the RBL.

Wrong program, no music, a vicar doing his best singing the psalms when he tried to replace the concert band. But….I really felt sorry for him.