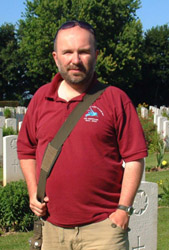 As always the main events took place on 6 June - the anniversary of D-Day but our D-Day related visit began on 5 June when we met the eminent military historian Paul Reed. Alastair had been in contact with Paul for 2 years but this was this was first time Fred and Paul had met. The discussions centred on how best to help veterans to continue to visit Normandy for as long as they are able. Paul had heard that it was likely that the National Normandy Veterans Association (NVA) was likely to be dissolved in 2014 which is, of course, the 70th anniversary of D-Day. All three agreed that it would be both sad and rather defeatist to allow the Association to fold. We agreed that we would attempt to create a support structure which would enable the NVA to continue well beyond 2014 so that veterans were given the financial help which is vital to enable them to continue to visit the memorials, cemeteries and battlefields and to maintain the reality of what the Normandy Campaign means to all of us and mankind in general. We felt that it would be a regressive step for the role of the NVA to be taken on by another organisation which deals with other associations and elements of veteran assistance - D-Day was one of the most important days in world history and those who fought in the campaign and those who have an affinity and interest in D-Day and its aftermath deserve an associate entirely devoted to it. We will keep you updated on our progress but if you have your own views - either post them on the forum or just send an email.

Photo's: Alastair Dutch with the wreath for the HLI

A focus of our visit this year was Alastair's recent decision to join the HLI Association in memory of his uncle Alastair Hardie who served in the 10th Battalion (City of Glasgow) Regiment of the HLI and fought in the Normandy Campaign but sadly was killed in Germany right at the end of the war. The HLI Association suggested that Alastair should lay a wreath at the only memorial to the HLI in Normandy which is in the small village of Buron near Caen. The battle at Buron was one of the bloodiest of the campaign and vital to the success of the Battle for Caen. So we set off in the early morning for Buron. 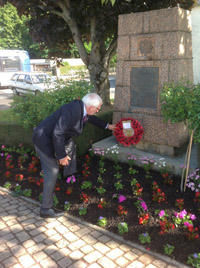 It was a lovely sunny morning and the flowerbed which encircles the memorial was in full bloom and the floral tributes which had been placed by the Municipal Authorities of Buron at the Sherbrooke Memorial looked beautiful as the sun shone on them. But there was a certain sadness in our hearts when we saw that no tribute had been paid at the HLI memorial. But our spirits were lifted when Alastair had laid our wreath of poppies at the foot of the HLI Memorial - the poppies made for a proud and fitting tribute to the brave lads who fought in the colours of the HLI at Buron and everybody can now see the HLI emblem at the centre of the wreath which makes it clear that they have not been forgotten. The photographs accompanying this article show how poignant a moment it was at Buron.

Jerusalem, a 16 year old and a moment of honour 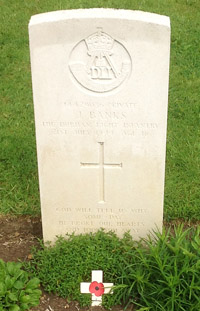 Jerusalem Cemetery is one of the smallest British War Graves Cemeteries in Normandy and it contains the grave of one Private J Banks of the Durham Light Infantry who was killed on the 21st of July 1944 aged only 16 years. He is one of the youngest casualties of the campaign and his grave is in one of the most memorable graveyards in Normandy - we had visited before and we were determined to return this year to lay a wreath on behalf of the South East Branch of the NVA. We had anticipated doing it ourselves with just Fred and Alastair paying their own tribute. But as we parked the car a coach pulled up containing a group of veterans who had come to visit. When we explained that we had a wreath they resolved to mount a full wreath laying ceremony with accompanying music and dedications. Soon a portable cassette player appeared and the veterans fell in with Fred and Alastair as honorary members of their guard of honour. And a full ceremony proceeded - the Last Post, a Minute's Silence, the National Anthem and the Exhortation all included - and of course Fred and Alastair laid the NVA Wreath. It was a very moving and special time for all of us - the veterans looked so proud and every inch the heroes they are and the wreath looked so striking against the cream of the memorial. Looking back as we were leaving the cemetery through the small entrance we were all struck by how stunningly beautiful and peaceful it looked - such a fitting tribute to the soldiers whose resting place it is. It really makes one think just how important it is to keep visiting places like the Jerusalem Cemetery and to pay a debt of honour to the brave men who are buried there.

The British Cemetery at Ranville and a very wet President de la Republique.

So it was now on to the cemetery at Ranville which is one of the largest British War Graves cemeteries in Normandy for the appearance of President Francois Hollande to pay tribute to the British dead of Operation Overlord. Security was exceptionally tight and we had a real route march to find an entrance to the cemetery which would allow us in - the French are obviously very keen to cosset their newly elected President. Just as the ceremony was about to begin and shortly after the President had arrived the heavens opened and an absolute deluge came down - it really teemed with rain. But to his great credit the President stood bare headed as he laid his tribute accompanied by the British Secretary of State for Defence - Philip Hammond. He then proceeded to meet all of the veterans individually and lots of the members of the public who had come to see him. By the end of his time at Ranville Monsieur Le President resembled very closely 'a drowned rat' - he was absolutely wet through - but the time he spent in the appalling weather conditions is a tribute to his respect for those who fought and died during the Normandy Campaign - well done Mr President - he certainly went up in our esteem. We also of course resembled the aforementioned drowned rat - but that's all part of Normandy in early June - just like it was in June 1944. So a really splendid D-Day with a range of great ceremonies which will provide us with memories to treasure all our lives.

But there was another event to add on 7 June in Arromanches. . . .

Photo: Germans marching on the Place de Juin in Arromanche on the 7th of June 2012

When we saw on a poster that Princess Irene's Brigade from the Netherlands were going to parade on the esplanade overlooking Gold Beach in Arromanches we had imagined that it would be just that - a detachment of Dutch soldiers marching in honour of the Dutchmen who took part in the Normandy Campaign and who landed via the Mulberry Harbour at Arromanches in 1944.

But what we got was 'something completely different' as the saying goes!!

Along with the Dutch soldiers there was a detachment from the United States Army and a small detachment of soldiers from the German Army. As we approached the square which as many of you will know is adjacent to Gold Beach with the remains of the Mulberry Harbour in the distance one of the first things we noticed was that the flagpoles next to the Musee d'Embarquement at the far end of the esplanade were missing their flags - normally they bear the flags of the allies who took part in the D-Day invasion - the UK, USA, Canada, Czech, Norway, Poland and France. When the ceremony began and the detachments marched onto the square it was quite a challenging sight to see German soldiers parading in a place which is so associated with British veterans who see Arromanches as such an important symbol of their bravery on D-Day and beyond. It was very significant to note that although there were still British veterans in Arromanches (we had seen a number of them earlier in the morning) that none attended or were spectators at the parade. And the same can be said for the French - there was no French military or defence representation - something which is very unusual when military remembrance events take place in France - there is invariably a French military presence - the only Frenchman who had any part in proceedings was the Mayor of Arromanches who looked distinctly uncomfortable.

The ceremony took a traditional form with a welcome address from the Mayor of Arromanches and a short speech by a retired Dutch general on behalf of the Dutch veterans. But then there was a rather extraordinary address by the Charge D'Affaires from the Dutch Embassy in Paris in which he attempted to justify the presence of the German soldiers as an attempt to put the issues of the war into the background and emphasised the role that Germany plays in Europe today and in conflicts such as Afghanistan. His speech seemed to focus the listeners attention on the issue (of the German presence) which was almost unsaid rather than detracting from it. His words were all the more controversial as Fred is aware of recent Court Cases in Holland which fly in the face of the German participation in the parade on 7 June in Arromanches.

The ceremony ended with the laying of floral tributes including by German officials and the playing of national anthems including that of Germany. For many of us standing on the seafront at Arromanches it was a rather chilling experience to hear that tune floating over beach at Arromanches which is so imbedded into the consciousness of the those who fought on those beaches to help defeat Nazism and to liberate Europe. Maybe with veterans still returning to the beaches every year to remember their fallen comrades and to revisit the places where their valour changed the world forever it is too soon to be have German soldiers marching to the tune of their anthem in Arromanches so uniquely associated with D-Day and the veterans while they are still alive and their memories so vivid. We would be fascinated to hear your views on whether you think this parade was a good thing or the opposite. For Fred and Alastair it was a difficult ceremony to watch.

So it was an extraordinary few days in Normandy at the time of year when veterans are everywhere and when the people of Normandy remember their Liberation and their Liberators. It was as always a privilege and an honour to be part of it. Whether laying a wreath at Buron for the brave lads of the HLI to standing shoulder to shoulder with veterans at the Jerusalem Cemetery honouring the life of a young 16 year old boy who laid down his life for freedom 68 years ago. Or indeed standing in a cemetery in Ranville in the pouring rain with newly elected President of France honouring all those who gave their life in the Normandy Campaign all those years ago. Or watching German soldiers marching next to Gold Beach - which made for a thought provoking and rather unexpected end to our visit.