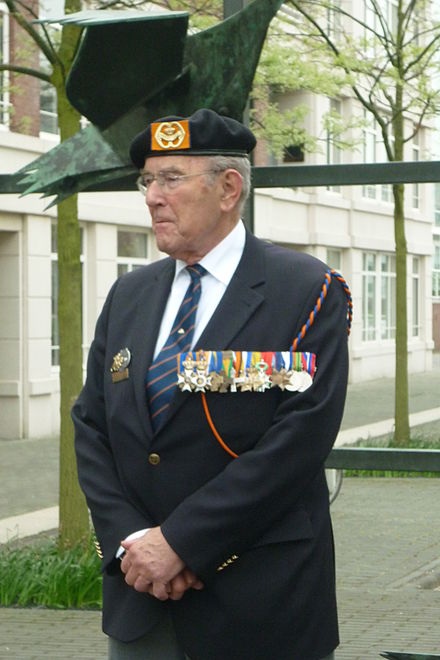 Last year I was surprised to see serving German soldiers marching with the Princess Irene Brigade In Arromanche during the D-Day commemorations. see this article which we wrote last year

A short impression of the ceremony

Last year I was surprised to see serving German soldiers marching with the Princess Irene Brigade In Arromanche during the D-Day commemorations. see this article which we wrote last year: https://www.backtonormandy.org/stories/651-honour-rain-and-controversy.html

This year I was surprised again to meet the well-known retired general Rudie Hemmes. I thought I would have a discussion with him about last year And I was disappointed that he was again going to take part this year in yet another parade along side serving German soldiers. When I questioned whether this was the appropriate thing to do with so many British veterans still in Arromanche, remembering their fallen comrades from the Normandy Campaign, he continued to justify his course of action by saying that my views are outdated and it is now time to commemorate with the Germans. And he said that the Dutch Government agrees with his point view by sending the Dutch ambassador.

Despite his arguments, I disagree with his point of view, but I initially respected his right to hold his opinion.

But this respect only last half an hour when I attended the event I came to Arromanche today for and that was to pay my respects at the ceremony on the square to honour the British Veterans of D-Day.

I was horrified that as the ceremony progressed and I looked back at the restaurant where I had spoken to the general only to see him, still sitting and drinking with his fellow officers. While all the other people gathered on the square paying respect and homage to the heroes of D-Day a Dutch General who fought on the Allied side in the Second World War was not bothering to join in the respect to his erstwhile colleagues.

It seems to me that General Hemmes has his priorities a bit mixed up.  Whilst it might be just about acceptable to argue that it is OK for German soldiers to march on the esplanade at Arromanches on the day after the D Day commemorations it cannot be right that he feels it more important for that to happen than him to pay his respects to the soldiers who liberated Europe including Holland from the jackboot of Nazism. I see it as a very bad example for the soldiers and officers who were with him. A general not worthy.