Don McCarthy is one of the most inspiring veterans in the documentary Omaha Beach, Honor and Sacrifice. Above you can see the trailer with Don McCarthy saying his prayer. I (Fred Vogels) had the honor to write the music for this very moving documentary with the story of The Landings on Omaha Beach.

To see his story, register on this website. For free. https://backtonormandy.org/community

Read more about this regiment: click here. Or the whole Blue and Gray Division on a map: click here

In the early morning hours of June 6, 1944 on Omaha Beach, 29th Infantry Division soldier Don McCarthy looked around him and saw only bodies. Most were dead, some barely living and others too scared to move. Don was part of some of the earliest waves to land on Normandy’s shores as the Allies began the liberation of western Europe in one of World War II’s most momentous days.

With bullets flying, artillery and mortar shells dropping all around him and smoke drifting all along the water’s edge that morning, McCarthy thought this would be a good time to ask God for a little help.

Don told God that if he helped get him off the beach alive he would spend the rest of his life doing anything God asked of him and honor him any way possible.

Don McCarthy got off Omaha Beach on D-Day and was wounded later that afternoon, but he was alive and on his way back to a hospital in England. Most of his fellow 29’ers weren’t as fortunate.

After World War II, every morning Don McCarthy found himself kneeling in a pew in church praying the Rosary. Every morning. Every day. Every opportunity he got Don McCarthy continued to thank God for getting him through that ‘Day of Days’, while also praying for those fellow 29th soldiers on the beach that day who never got the chance to get married, raise children or watch their grandkids and great-grandkids run around the backyard.

Don kept his promise. He “earned it”, as one of the famous ending lines in Saving Private Ryan goes. 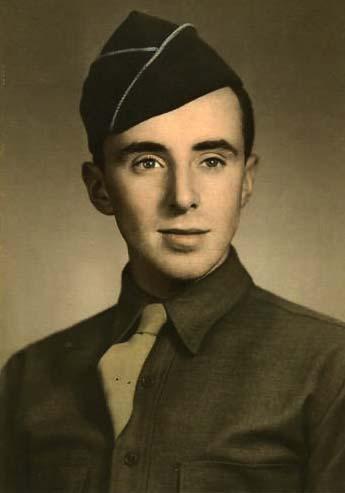 Don McCarthy died last week after living a large portion of his life in Warwick and then, Smithfield. He had returned to Normandy 14 times since the end of World War II, taking the exact route he did in June of 1944, stopping in England to visit friends, then on to the shores of France, where more friends awaited his arrival.

Sometimes Don even sailed across the English Channel to get there, as was the case on June 6, 1944.

Initially, it took him a long time to get the courage to return to France for that first visit since D-Day, but when Don did, he was able to put some of his D-Day demons to rest and the nightmares didn’t come as frequently. Don was able to to step on Omaha Beach again and not see the carnage and bodies and blood-red waves crashing on the shore, but rather the beauty of the Normandy coast today. He played a role in that, even if he humbly would not admit it.

Don McCarthy was there for most of the major anniversaries of D-Day in Normandy, the last being the 70th anniversary in 2014. I think he knew it would be the last time, but wouldn’t admit that to anyone, especially himself. He was just so excited to see the newest monument on Omaha Beach that honored his regiment, the 116th, as it was dedicated. Tears streamed down his face, but his smile was a mile-wide at the same time. He told me he was planning to try and be back for the 75th anniversary in 2019, but it was not to be.

It’s sad when our heroes die. I mean real heroes, not the kind that play sports or sing music or entertain us on television and the movies.

Don McCarthy isn’t just a random obituary in the paper. He was there on a day when the world changed for the better. He helped to make that happen. He made a deal with God that day and unlike many others who made similar asks that morning, Don kept his word, right until he took his last breath and rejoined those fellow men of the 29th Infantry division whose souls, since 1944, have lain under the white crosses and stars of David in Normandy’s American cemetery.

Don McCarthy asked God for help on D-Day and spent a lifetime making sure he fulfilled his end of the bargain.

He was the beloved husband of 70 years of Elaine M. (O'Shea) McCarthy. Born in Boston, Donald was a son of the late William A. and Doris M. (McArdle) McCarthy. Donald was employed as a Communications Manager for the former New England Telephone Company at the Newport Naval Base as well as Quonset and Davisville Bases and later was a Communications Manager for Amtrak.

He was also the owner and operator of Atlantic Marble Restoration for ten years.

During World War II, Donald honorably served in the 1st Battalion 116th Regiment 29th Infantry Division of the US Army.

He was the Commander of the 29th Division Association from 1995-96 and made 14 visits to Normandy.

On July 24, 2014, he was awarded the French Foreign Legion of Honor in Normandy. Donald was a communicant of St. Francis of Assisi Church in Warwick.

He was also a member of the Board of Directors at Save the Bay and a member of the Providence Rotary and the Providence Chamber of Commerce. Prior to residing in RI, Donald lived in Needham, MA where he was active in St. Joseph's Church and the Knights of Columbus. Donald was also a resident of Bristol, RI from 1962 – 1977 and an active communicant of St. Mary Parish. In addition to his beloved wife, Donald is survived by four loving sons: Donald A. McCarthy, Jr. (Denise) of Portsmouth, RI, James I. McCarthy (Janet) of Charlestown, RI, Raymond M. McCarthy of No. Kingstown, RI and William A. McCarthy (Emily) of Exeter, RI; ten grandchildren and seven great-grandchildren. His funeral will be held on Monday, August 7, 2017 at 10 AM in St. Francis of Assisi Church, 596 Jefferson Blvd., Warwick. Full military honors will be bestowed immediately following the Mass and burial will then take place in Belmont Cemetery, Belmont, MA

Sorry, belatedly we just learned on Don's passing. We had the honor of interviewing him for our WWII oral interview project in May 2019.

Fred Vogels
There are no comments posted here yet